A vegan ploughman's lunch is a dairy-free version of this traditional English salad plate often served in pubs.

It's an old English recipe, if you can call it a recipe.

Today I'm sharing the history of a ploughman's lunch and giving you lots of options for you to make it just how you like it.

Of course, my vegan ploughman's lunch recipe is vegan.

📖 History of the ploughman's lunch

I bet you are thinking of a farmer sitting in his field after an arduous morning ploughing his field and unpacking some crusty bread cheese, pickles and salad.

To be fair, back in the day, many farmers and plowmen probably did take something similar to this for their lunch, just grabbing what they had in the larder.

Although, back in 1394 when the ploughman's lunch was first seen in print, it was probably more likely to be just bread, cheese and beer.

Back in the 1800s and early 1900s farm-workers would still be drawing water from streams and wells, but the water often lead to upset stomachs.

So beer was a popular drink for farmworkers as it was a safer option.

Well that was their excuse anyway.

🥗 Modern version of this lunch

The modern version of the ploughman's lunch is a bit more than bread, cheese and beer, although they are still part of it.

They reinvented the ploughman's lunch and included pickles and salad alongside bread, cheese and beer for their guests at their events to try and to promote both of their businesses.

It soon took off and has been a popular favourite on pub menus since then.

🍴 What to include in a ploughman's lunch

As I have said it is usually cheese, bread, pickles and salad served with beer, but let's give you some tasty options.

Crusty bread is the standard option, but here are a few ideas. Choose one of them.

Make sure to spread that bread with vegan butter.

A chunk of cheese would usually be included but we are more limited with vegan cheeses. I used slices of Violife vegan cheddar which I had in the fridge.

Pickles and chutney are an important part of a ploughman's lunch.

🥒 Pickled rather than pickles

Don't forget those pickled extras too.

Now on to the salad. It's always quite basic, choose a few of these.

Salad dressing is not part of a ploughman's salad.

You have the pickles for a shot of flavour, but really it's all about the bread and cheese and the flavours of the salad should be left to shine through.

Of course, you could add some, but try it without any first.

🍻 To beer or not to beer

Beer or lager is traditionally served with a cheese ploughman's lunch.

Saying that, cider is also a good choice. It would be great with all these flavours.

If you don't want to drink alcohol, you could just choose a soft drink.

🥪 Is a ploughman's also a sandwich?

Yep, you can also make or buy a cheese ploughman's sandwich.

It's sold in sandwich shops, supermarkets and cafes.

So if you want to make your own, try my Vegan Cheese Ploughman's Sandwich.

Here are a few more vegan salads for you to try.

Check your spam folder if they don't arrive, I share a new recipe on each of my blogs every week. 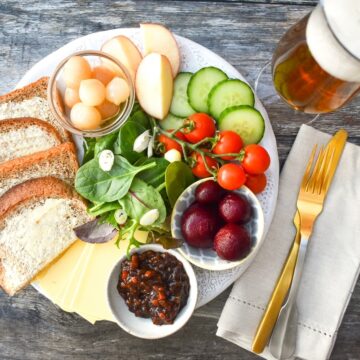