A delicious vegan coronation coleslaw flavoured with spices and mango chutney. Perfect as a sandwich filling, served with a baked potato or dolloped on a burger.

🥘 What is Coronation Coleslaw?

It's actually a spin-off from a very un-vegan recipe.

In 1953 Le Cordon Bleu London created coronation chicken for the coronation of Her Majesty The Queen (Queen Elizabeth II).

It was basically a chicken salad with a curry sauce and it soon became popular with the British public.

Of course, we never like to leave something alone, so the sauce used in the original dish was then used as a coleslaw dressing. Hey, salad is salad.

This is a vegan version of that delicious slaw that includes cabbage, carrots, and raisins in a creamy curry dressing.

It's super easy and quick to make and tastes delicious.

Here are the ingredients you need to make vegan coronation coleslaw.

The main ingredient for coronation coleslaw as with a traditional slaw is cabbage.

For this recipe, white cabbage is the best choice.

Shred it fairly finely, but you don't need to be too precious about it.

Grated carrot is the next main ingredient in this slaw. Just don't peel the carrots.

We are so used to peeling carrots, but so many of the nutrients are in the skin, so don't peel them before you grate them, just give them a quick wash.

Plus, it's also less work so a win-win situation.

Raisins are not often seen in coleslaw, but the sweetness works really well against the curry flavours.

I just add them straight in, but you could plump them up in some orange juice before adding them so they are softer and extra juicy.

Just leave them to soak in orange juice for a few hours before you make it or overnight.

You can make a few tweaks to this tasty slaw to change things up.

🍽 How to Serve Coronation Coleslaw

Homemade coronation coleslaw will keep in the fridge for 3-4 days.

Store it in an airtight container.

The flavour will develop and improve as the week goes on.

🌡️ Can you Freeze Coronation Coleslaw?

I would not recommend freezing it.

If you want to prepare ahead or if you want smaller portions of coleslaw, here's what to do.

Follow the recipe for the veg and prepare the cabbage, carrots and raisins. Don't add any of the other ingredients.

Give it a good mix, then freeze in smaller portions.

You can take out a small portion and defrost in the fridge.

If you love this recipe, why not make up a batch of the spice mix and keep it in an empty herb or spice jar, then it's ready whenever you are?

Here are step-by-step photos of the vegan Coronation Coleslaw being made.

Now add the mango chutney and spices and season with salt and pepper.

Mix well then taste to check the seasoning. 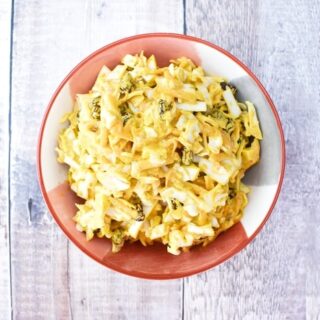