A simple recipe for vegan Russian dressing, the dressing traditionally used in a classic Reuben sandwich, which is great on salads too.

I've been playing about with this vegan Russian salad dressing to serve in a vegan Reuben sandwich.

It might surprise you, but the dressing is not Russian at all.

It was created in America and called Russian dressing because the original dressing from the early 1900s contained caviar, which was popular in Russian cuisine.

It's similar to a rose marie or thousand island dressing but is more piquant.

This stuff is seriously addictive.

You'll be drizzling it over everything.

This recipe uses a few easy ingredients, you will probably have in your fridge and store cupboard already.

See recipe card below for quantities.

🥄 How to Make Russian Dressing

Russian dress is super simple to make. Just takes a couple of minutes, but tastes so good,

Measure the mayo, mustard and ketchup into a bowl.

Add Worcestershire sauce and season with salt and pepper.

Hint: Check out the Free-From and Gluten-Free sections of your supermarket for vegan Worcestershire sauce. It's also available online.

There are a few tweaks you can make to this recipe, although I would recommend trying the recipe as I have shared it.

🥗 How to use Russian Dressing

Russian dressing is traditionally used in a classic Reuben sandwich, but it's so delicious and would be great in lots of dishes.

Here are a few ideas for serving vegan Russian dressing:

Store the dressing in an airtight container in the fridge. It will keep for a week.

Salad dressing doesn't freeze well. It tends to separate, so if you don't need much you are better making a smaller portion.

This is a small batch dressing, but it's easy to scale up if you need a bigger batch.

Spice it up by adding some sriracha sauce.

Here are a few more vegan salad dressing recipes for you to try:

📖 Want Recipes Delivered to your Inbox?

Also sign up for my Tinned Tomatoes newsletter for a selection of recipes delivered to your inbox each week or sign up for my email updates and don't miss out on the latest recipe. Check your spam folder they don't arrive.

📋 pin it for later 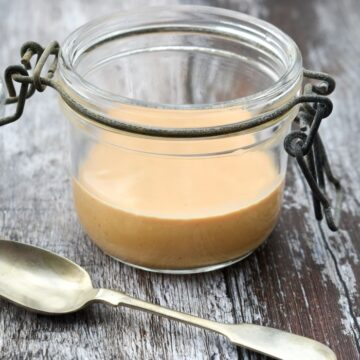