This delicious vegan Reuben Sandwich is toasted and includes a drizzle of Vegan Russian Dressing.

I've been trying out lots of new sandwiches on my husband and he's enjoyed them all so far, but this vegan Reuben sandwich is his favourite.

This toasted sandwich is a vegan version of the classic American sandwich that originally contains beef, which I substituted with beets for their earthy flavour.

I also made a vegan version of the Russian Dressing, which is rather moreish.

You'll know what I mean once you try it.

This delicious sandwich has just a few ingredients, but when done right this sandwich is something rather special.

See recipe card below for quantities.

Here are step-by-step photos of the vegan Reuben sandwich being made.

Here are a few tweaks you can make to this recipe.

Here are a few of my favourite vegan sandwiches for you to try:

Also check out 39 of the Best Vegan Sandwiches.

Also sign up for my Tinned Tomatoes newsletter for a selection of recipes delivered to your inbox each week or sign up for my email updates and don't miss out on the latest recipe. Check your spam folder they don't arrive.

Serve this toasted sandwich for lunch with some salad and a few crisps (chips) or serve it as a light dinner with potato wedges and salad or corn on the cob. 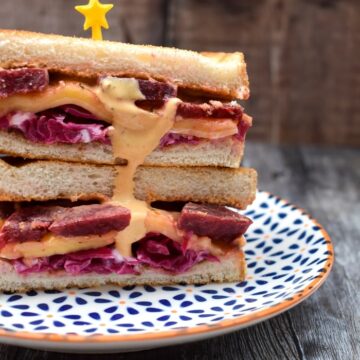