New York Deli Sandwiches are, as you may guess, a sandwich made famous in the delicatessens of New York, but they have travelled the world in popularity.

You can buy vegetarian versions of this sandwich in Pret a Manger and Marks & Spencer, but it's time we claim it for vegans, and what better way than to make it fresh at home.

Honestly, I can guarantee you are going to love this sandwich!

Here are the ingredients you need to make my vegan version of a New York Deli Sandwich.

If you were ordering a New York Deli-style sandwich in the Lower East Side in Manhattan, your sandwich would probably be served on rye bread.

The rye bread served in New York is very different from the rye served here in the UK.

Our rye is generally dark, rich, and dense, almost like German pumpernickel.

Rye bread in the Lower East Side is a lighter, fluffier bread made with a mixture of rye flour and white flour. I use this style of mix in my light rye bloomer bread, which would be fabulous for this sandwich.

When I make this sandwich I usually use my regular wholemeal bread, which is lovely and soft.

No doubt a New York Delicatessen would likely serve Swiss cheese which is mild and almost nutty.

My preference is Violife sliced cheddar, which is also mild, so it works well in this sandwich.

Use your favourite vegan cheese. Go with something a bit stronger in flavour if you like.

Americans call them Dill Pickles, but in the UK they are called Gherkins. But what are they?

Basically, they are small cucumbers that are pickled.

Why are they called dill pickles In America? It's because dill is added to the vinegar.

Large sliced gherkins are good because they are evenly pre-cut making them perfect for adding to sandwiches.

Come on, it has to be American mustard for this one.

Delicious on bean burgers and vegan sausages, but it's also rather fabulous on a sandwich.

And the good news is, it's suitable for vegans.

This sandwich also contains pickled red cabbage. I also used it in my Vegan Reuben Sandwich and it's gorgeous stuff.

However, you could use sauerkraut instead. I will leave you to decide.

When in the Big Apple, you would be served sauerkraut for the original taste sensation, but I think pickled red cabbage makes a fabulous substitution.

Check out 39 of the Best Vegan Sandwiches

Step-by-step photos of the vegan New York Deli Sandwich being made. Keep scrolling for the full printable recipe. 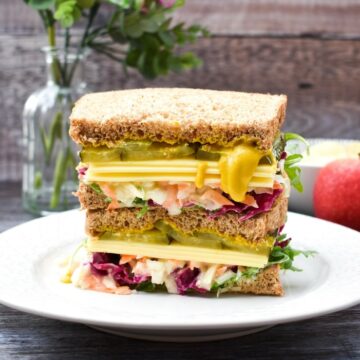