An easy recipe for the most delicious vegan cheese and onion sandwich filler to make the classic British Cheese & Onion Sandwiches.

This tasty sandwich is a staple in cafes and sandwich bars here in the UK. It's also sold in supermarkets and as a tub of sandwich filler, but never a vegan one.

It's time to change that!

So I give you vegan cheese and onion sandwich filler.

Here are the ingredients you need to make this popular sandwich filling.

You need grated vegan cheddar for this sandwich filler.

You can either buy it ready grated or grate a block of cheese yourself.

I'm all in favour of grated cheese for convenience, but if you're watching your budget, you will usually find the block is either cheaper or you get more cheese for the same price.

We like Violife vegan cheddar but use your favourite cheese.

Even though I use vegan cheddar for this sandwich filler, I include nooch too.

Nooch is another name for nutritional yeast.

So why add cheese and nooch?

People generally add nooch instead of cheese, but I like to add both.

I also add it for a nutritional boost.

Nooch is a good source of Vitamin B12 which is hard to get in a vegan diet and very important. A lack of it can lead to anaemia and extreme tiredness

You can read more about it in the NHS article Vitamin B12 or Folate Deficiency Anaemia.

For the best flavour, use both red onions and spring onions.

Red onion has a sharper flavour with a bit of sweetness and spring onions have a milder flavour.

The combination of the two really works and adds a nice pop of colour too.

🍞 Which type of bread?

When you buy a ready-made cheese and onion sandwich it is usually on soft white or wholemeal bread.

Whichever bread you use, make sure it's bread with a soft crumb and crust.

This sandwich should be soft and unctuous!

🔪 What do you spread on the bread?

It has to be butter, vegan butter of course.

Don't let me see you spreading mayo on that sandwich! It requires the creamy and slightly salty butter flavour.

Trust me, do this right and it will be a triumph and totally comforting.

Traditionally a classic cheese and onion sandwich wears nothing more than that spread of (vegan) butter, however, it can be nice to add a bit of green.

Try adding one of these:

Now don't be telling anyone I told you to do this.

Spread your bread with vegan butter or spread, then add a really generous layer of your sandwich filler.

Before you add the top of the sandwich, add a layer of crisps (chips) for crunch.

They have to be standard or crinkle crisps, none of those weirdly shaped corn snacks in the shape of a space rocket, monster claw or puff. You know what I am saying!

It should give you crunch but not detract from the awesomeness of the sandwich filler.

Only add crisps just before you are about to eat the sandwich or they will go soggy and you can kiss goodbye to that crunch.

You can make the rest of the sandwich ahead of time and keep it in the fridge.

Here are some of my favourite vegan sandwiches:

Step-by-step photos of the vegan Cheese & Onion Sandwich being made. Keep scrolling for the full printable recipe.

Now add the finely chopped spring onion and chives, then add the mayo and lemon juice.

Next, add the nutritional yeast and season with salt and pepper, then give a good mix to combine.

Cover and set aside for at least 10 minutes for the flavours to develop.

If you're making it ahead, pop it in the fridge, then allow it to come to room temperature before making your sandwich for the best flavour.

Let's layer up that sucker!

First spread two slices of soft wholemeal bread with vegan butter or spread, then add a layer of salad leaves (if you are adding them).

Finally, add a generously thick layer of your sandwich spread and top with the second slice of buttered bread. 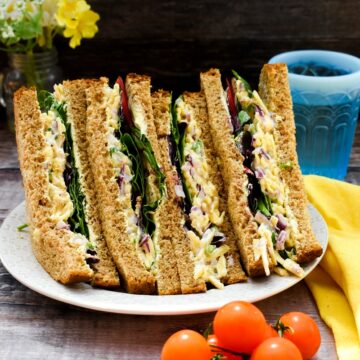