Continuing my mission to bring you the tastiest vegan sandwiches to perk up lunchtime, I bring you my version of a toasted Cuban sandwich.

And it really is!

🥪 What is a Cuban sandwich?

There is some debate about where the Cuban sandwich actually came from.

Some say it was invented by the Taino tribe in Cuba, influenced by Spaniards in the area.

For this vegan version, I use the gutsy and savoury flavour and texture of mushrooms to replace the ham.

A few simple ingredients are all you need to make this exquisite toasted sandwich.

Mushrooms are the star of this toasted sandwich but don't add them raw. They need a bit of love and attention first.

I used closed cup mushrooms for this delicious sandwich, but you could use large flat cap, portobello mushrooms or even chestnut mushrooms.

Any standard mushrooms will do (this is not the recipe for wild mushrooms), it's more about spending a few minutes cooking and seasoning them well.

Just season then with salt and pepper, but a pinch of paprika would be good too.

I used Voilife vegan cheese, but you may use your favourite.

You can slice a block of cheese but I find packs of sliced vegan cheese really handy for sandwiches and toasties.

Vegan cheddar slices don't melt as well as standard cheese, but it does melt a little and softens, enough to make this sandwich a real winner.

All vegan and all super delicious! Bring it on!

If your kids are heading back to school and you need more kid-friendly lunch ideas, check out these lunch guides.

Step-by-step photos of the Vegan Cuban Sandwich with Mushrooms being made. Keep scrolling for the full printable recipe. 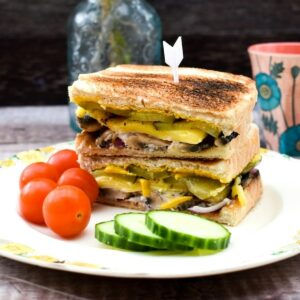