Easy vegan halloumi & spinach borek are a twist on Turkish filo parcels, which are perfect for lunch (and lunchboxes) with a salad.

Let's start by saying this cheese is called hellim in Turkey and not halloumi.

Halloumi is actually the Greek name for the salty cheese in these parcels, but as that's not a familiar word to most people, I decided to call this halloumi borek, then explain here in the post.

Of course, it's a vegan version of hellim (or halloumi) I use, which is meltier than the original, but still so good in this borek.

These spinach and halloumi parcels are made with filo pastry.

This particular pastry is a super-thin pastry that you build in layers for a crispy finish.

I've watched it being made in North Cyprus (the Turkish side) and stretched paper-thin by some very skilled ladies with the thinnest of rolling pins. They roll it into huge sheets. It's quite amazing to see.

💭 Tips to get the best from filo pastry

Here are a few tips to get the best results from filo pastry.

There are several brands that now do vegan halloumi and feta cheese.

Vegan halloumi actually grills quite well, although it does release more water than the dairy style.

When it is baked into these filo pastry cigars, it melts more than standard halloumi would.

When cooked with the feta it's more like a stretchy mozzarella. It's quite melty but still has some substance.

A very pleasing mouthfeel with a slightly salty flavour.

🥗 How to wilt spinach

No need to get a pot out to cook spinach, as it only needs to be wilted.

Pop it in a colander and rinse well, then boil the kettle and pour boiling water over the spinach to wilt it.

If you have a tap with really hot water, you can use that to wilt the spinach.

Once it has softened, rinse it with cold water (so you don't burn your hands), then squeeze as much water out as you can.

It will look like you have hardly any spinach let, but once you chop it, it will distribute through the filling well.

🥗 Can you use frozen spinach?

Yes, you can definitely use frozen spinach to make these vegan filo pastries.

Just defrost it and dry it on kitchen paper.

For a quicker defrost, pop a bundle (cube) or two in a bowl of hot water and set it aside to defrost. Once it has, just drain, then squeeze out the excess water and pat dry with kitchen paper.

📋 What you need to make vegan halloumi and spinach borek

Here are the simple ingredients you need to make these filo cigars.

Here are a few ideas for tweaking these pastry parcels.

Here are a few extras you could add to change up these tasty filo cigars.

My box of filo pastry stated 10 sheets, but it actually had 12, this is fairly common.

I used my leftover filo sheets to make a couple of sweet pastries.

A added some peanut butter and choc chips and folded the parcels the same way, but topped them with chocolate sprinkles and a sprinkle of cinnamon instead of seeds.

You could use biscoff spread instead of peanut butter if you like.

They were seriously lush.

These pastries are best served on the day you make them.

They are still tasty the next day, but won't be quite as crisp.

Once cool, store them in an airtight container lined with kitchen paper to absorb any moisture.

Here are a few more filo hand pies to try. 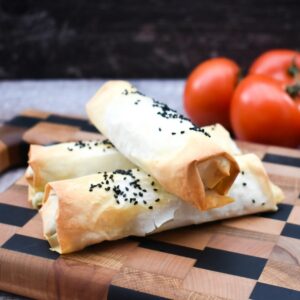