Easy mini vegan oat pancakes with cinnamon. They are soft and fluffy with the taste of a warming bowl of porridge with added cinnamon for spice.

Pancakes are requested regularly in my house and these mini vegan oat pancakes are my latest creation.

Both my husband and son love them, not to mention the dogs who hang about hopefully.

In Scotland, and in fact the whole of the UK we call these pancakes.

This type of pancake, which has a good rise, we call Scotch pancakes, and the thinner style are pancakes or crepes.

If you are in America, you may know these as flapjacks or flapjack pancakes.

What are flapjacks in Scotland?

To make things even more confusing, in Scotland flapjacks are traybakes made with porridge (rolled) oats.

For another Scottish bake, try my air fryer vegan fruit scones. They are simple to make and if you don't have an air fryer, you can bake them in the oven.

Last year when I couldn't get hold of flour, I made my own oat flour and started experimenting with it in cakes and bakes.

I loved the almost nutty flavour.

I thought it would make really tasty pancakes and it does.

How do you make oat flour?

Just whizz up porridge oats, which are also called rolled oats until they are a fine flour.

You can do this in a food processor or blender.

Just whizz them up the same way, into a fine flour.

Oat milk is another favourite of mine.

I also use oat milk to make these pancakes, but you could use your regular milk.

Mini food is always so appealing, don't you think?

Of course, you can make these the size of Scotch pancakes or bigger American pancakes or flapjacks as I believe they are often called.

Oh, and the plate they are sitting on is actually a small saucer, just in case you are thinking these oatmeal pancakes aren't all that mini.

Here are the simple ingredients you need to make these cute little pancakes.

Here are a few tweaks you can make to these pancakes.

In the summer I love to include these mini pancakes in a picnic platter to enjoy in the garden (or on the dining table if the weather is bad).

It's a nice way to serve up fruit and veg to children and big kids (adults).

Here's what I added:

These pancakes are best eaten on the day they are made.

However, you can make them and serve them in lunchboxes the next day.

You can also make the batter before bed and then cook the pancakes in the morning, although it will thicken overnight, you may need to add a little more milk.

Here are a few more easy pancake recipes for you to try:

For more lunchbox recipes, like these pancakes, check out my guides Packing Lunch, 39 of the Best Vegan Sandwiches and 45 Back-to-School Vegan Packed Lunches.

Pin it for later

Living on the Veg

It's a very friendly community with lots of recipes and chat. I'm in there every day chatting. It's such a nice place to spend time.

How to make mini vegan oat pancakes with cinnamon

Step-by-step photos of these vegan oat pancakes being made. Keep scrolling for the full printable recipe. 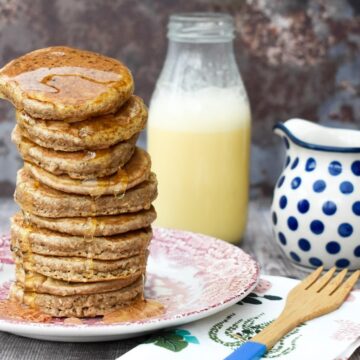 These pancakes are best served warm, but are good served cold in lunchboxes spread with vegan butter. You can add raisins or chocolate chips to make these more luxurious.