🧾 The history of Scottish flapjacks

Flapjacks are a traditional Scottish recipe.

You could say they were a bit of a happy accident. A very long time ago (oats were introduced to Scotland in 600 AD), crofts would have something known as a porridge drawer.

In the morning a big batch of porridge was made in a pot over the fire. and served hot in a bowl for breakfast.

Leftover porridge was poured into the porridge drawer where it would cool and set before it was cut into slabs.

And that's how flapjacks were invented.

For another traditional Scottish recipe try my Vegan Fruit Scones.

I usually bake flapjacks in the oven, but now I have an air fryer, I want to cook everything in it.

If you've bought one too you'll know what I mean.

I have a Tower Air Fryer, one of the ones with shelves and luckily enough my brownie pan fits perfectly.

Air fryers come in different sizes so you may need to measure yours to find a pan that fits.

Once your flapjack mixture is in the pan it can go on the shelf or the base of your air fryer.

If your air fryer is one with a drawer, you might want to pop something under it to raise it off the base.

Of course, you could bake this in the oven if you don't have an air fryer, just keep an eye on it from 20 minutes onward.

You can use a silicone or metal brownie tin for these oat bars.

Even though silicone is supposed to mean easy removal, I'd still line the pan.

I grease the brownie pan then lay a strip of non-stick baking paper across the tin, with some excess over the edge which you can hold on to when lifting it out.

I now buy double-sided non-stick parchment baking paper, which is non-stick on both sides.

On too many occasions I used the wrong side of normal baking paper and my baked goods would stick to the paper. So annoying!

I use ZeZaZu parchment sheets for baking (in case you are interested).

I buy them from Amazon as I couldn't find just what I was looking for elsewhere. They come in a cardboard packet of 100 unbleached sheets.

They are pre-cut into rectangular sheets which is super handy and fits my sheet pan perfectly.

Of course, there will be other brands available.

🔪 Should flapjacks be crisp or chewy

In my opinion, and the way we eat them here in Scotland is soft and chewy with maybe just a little crisp at the edges.

If they are thinner and crisp they are more of a cereal bar or oat bar.

These are known as oat bars elsewhere, but as we laid claim to them first in Scotland, they are definitely flapjacks.

To confuse things further in some parts of America flapjacks are what we call Scotch pancakes like these vegan banana pancakes.

📋 What you need to make golden syrup flapjacks

Here's what you need to make this energy-boosting Scottish oaty snack.

Not as simple as the original flapjack which was made with just oats, water and a pinch of salt (butter and sugar were a later addition), but just a few ingredients.

These oat bars are a great as a lunch box snack and kids love them.

The full recipe and method can be found in the recipe card at the bottom of this post after the step-by-step photos.

Here are a few tweaks you can make to the recipe.

I'll be sharing my easy air fryer recipe for scones soon, so make sure you are signed up for my new recipe email, so you don't miss them.

You can subscribe at the bottom of my about me page.

⏲️ How long will flapjacks keep

Flapjacks can be stored in a cake tin or an airtight container.

I usually line with baking paper, wrapping it over the top of the flapjacks.

They will happily keep for up to a week, less if your container isn't airtight.

They don't need to be kept in the fridge, but you can if you like.

Here are a few more easy vegan snacks for you to try. 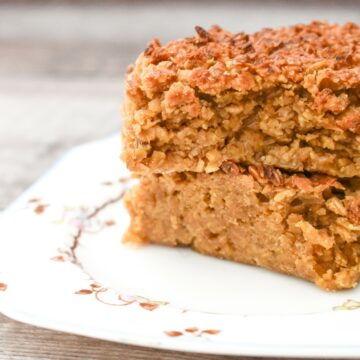 To oven cook, preheat your oven (same temperature), but check on it after 20 minutes and keep an eye on the flapjacks so they don't brown too much.