An easy recipe for vegan tomato soup with just 5 ingredients and seasoning. Made in under 30 minutes and served with a swirl of vegan cream. 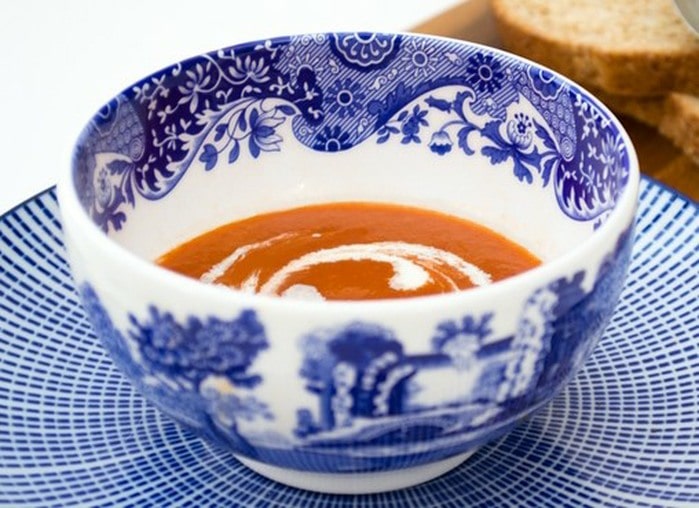 VEGAN TOMATO SOUP MADE WITH TINNED TOMATOES
This simple and quick soup is made with tinned tomatoes, which are also known as canned tomatoes.
It's on the table in under 30 minutes and with a swirl of cream it is very similar to THAT famous tomato soup which unfortunately isn't suitable for vegans.
It's rich, with a deep tomato flavour cut through with a swirl of cream.
It's made with just 5 basic ingredients you probably have in your fridge and cupboard right now.
It's very tasty, doesn't cost much to make, it's low-calorie and it's great for lunch.

WHAT YOU NEED TO MAKE VEGAN TOMATO SOUP

WHAT ELSE DO YOU NEED TO MAKE THIS SOUP?

This is one of those soups that really is much nicer if it is silky and smooth.
Once the soup is made, you can blend it in the pan with an electric stick blender, in a blender or in a food processor.
If you don't have any of these options, you could push it through a sieve once it has cooled a little. 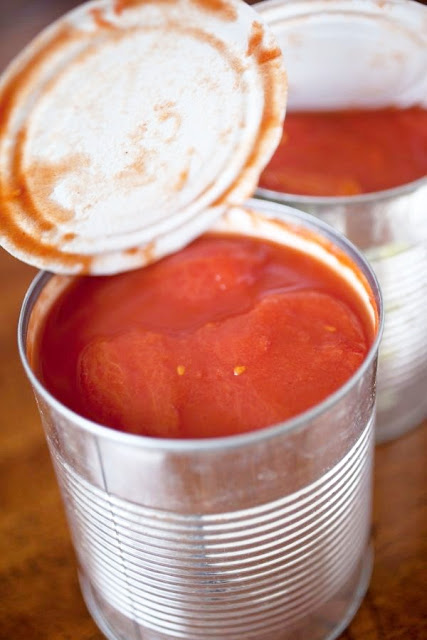 This really is a store cupboard recipe.
Apart from the onion and garlic, which are basic ingredients everyone usually has, all the ingredients are from the larder.
Instead of fresh tomatoes, this recipe calls for tinned tomatoes, which are also known as canned tomatoes.
It's a quick way to make a tasty, nutritious meal that everyone will love.
You can use tinned plum or chopped tomatoes.
If you use plum tomatoes, break them up with a wooden spoon while the soup is cooking. It doesn't matter how finely you break them up as it will be whizzed smooth.
While we are talking about tinned tomatoes, do pop over to my other blog named Tinned Tomatoes to check out the recipes over there. 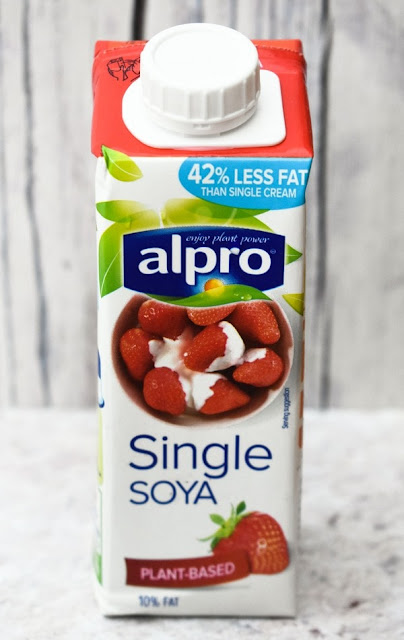 ADD VEGAN CREAM TO THE SOUP

What elevates this soup and makes it more like THAT famous tomato soup, is a swirl of cream added before it's served.
I used Alpro single soya cream, but you can use whatever cream you usually buy.
I buy little tetra packs of this cream and keep them in my store cupboard, but you can often also find them in the chilled cabinets at the supermarket.
It's just a pouring cream and doesn't whip, so don't get excited and think that this is one you can whip up thick and serve on a cake or other dessert.
also try Easy Roasted Butternut Squash Soup 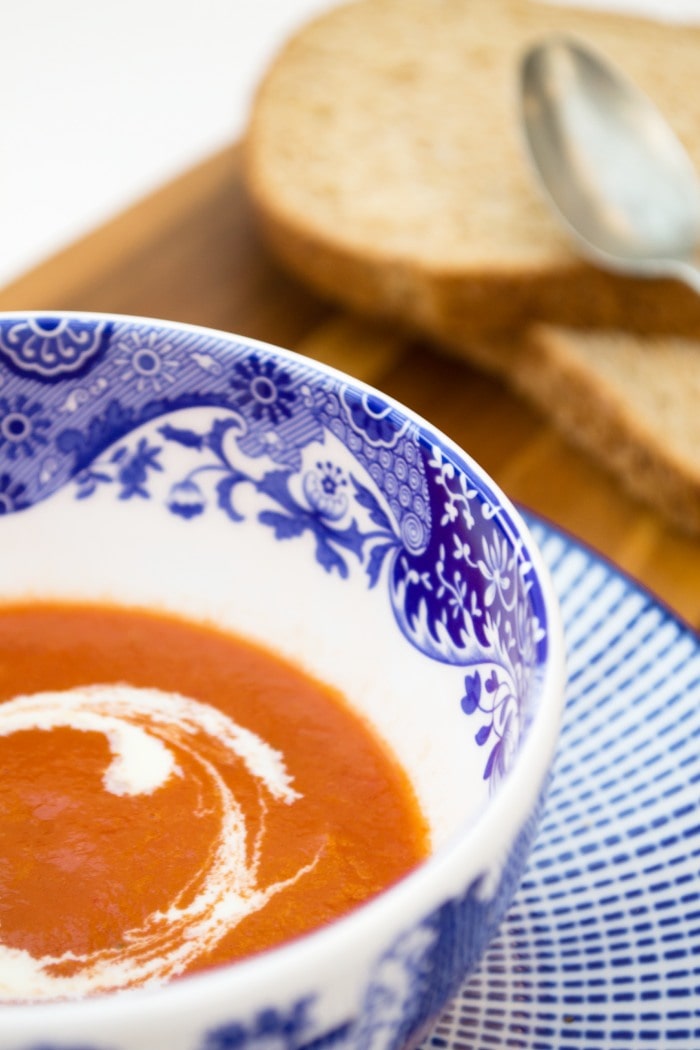 This is a small batch soup, but it can be kept in the fridge for 3-4 days.
If you're keeping it in the fridge, don't add the cream.

CAN THIS SOUP BE FROZEN?

This soup can be frozen in freezer bags or airtight tubs in the freezer for 3-4 months.
To defrost, remove a portion from the freezer and leave it in the fridge overnight.
Reheat, then add the swirl of cream.

This soup is perfect to add to your lunch box.
Either take it in a microwave-friendly tub with a tight seal, to heat at work or take hot in a flask.
You could also take some cream in a little bento-style dressing bottle (they are teeny weeny) or in a little tub.
Check out Japan Centre for cute Bento accessories for your lunch box.
Also check out Kid- Friendly School Lunch Plan for Vegan Kids

Make an easy vegan cheese and chive beer bread to serve with your soup.

It's a super easy, no yeast and no knead bread. 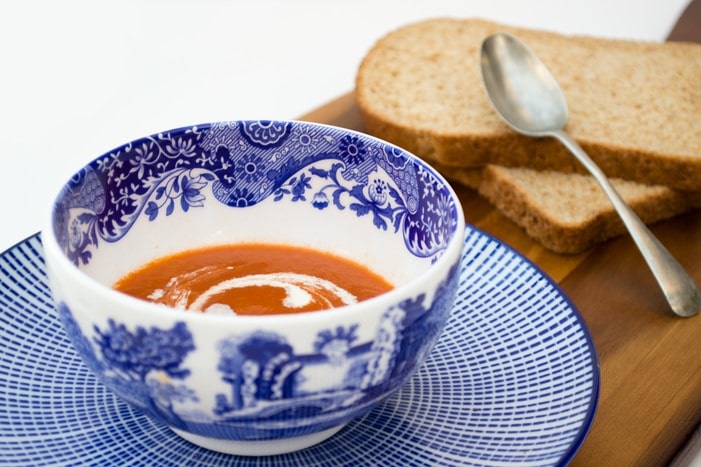 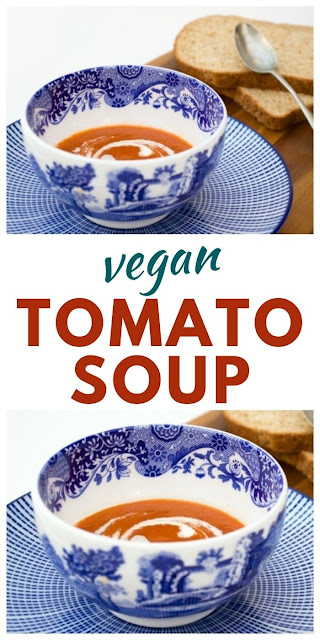 Follow me on Pinterest, Facebook, Twitter and Instagram.
Then join my Facebook group Living on the Veg. It's a very friendly community with lots of recipes and chat. I'm in there every day chatting.
You can also sign up to my Vegan Lunch Box newsletter and never miss a new recipe.
They'll arrive in your inbox once as they shared here on The Vegan Lunch Box. Also sign up to my Tinned Tomatoes newsletter for more vegan recipes. 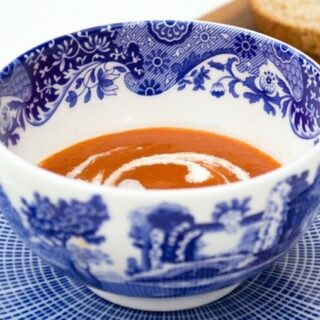