An easy, vegan cheese beer bread with chives. It's super quick to make with no yeast, no kneading and you can use plain (all-purpose) or self-raising flour. 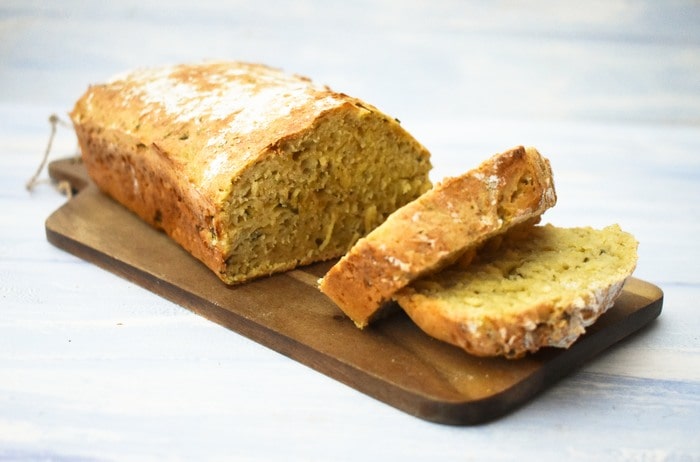 Beer bread has to be the easiest bread to make and the quickest to prepare.

This simple beer bread is flavoured with cheese and chives.

It's a rustic loaf with a good crust.

Well worth a try and a good place to start if you haven't made bread before.

You'll have fun and be amazed at how easy it is.

It always feels a bit like magic to me. 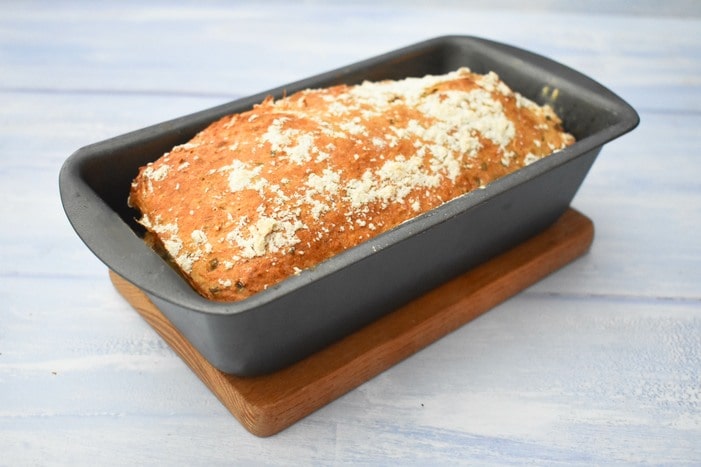 DO YOU NEED ANY SPECIAL EQUIPMENT TO MAKE VEGAN CHEESE BREAD?

Nope. You don't need any special equipment, it's a very basic recipe.

All you need is a bowl to mix the dough in and a loaf tin to bake it in.

Nothing fancy at all.

They vary a little in length and depth, but there's no need to worry.

I'd love to say it's the beer that replaces the yeast, but in all honesty, it's the raising agent.

Modern beer doesn't generally have enough yeast to give your bread rise.

Some have more than others, if you look at a craft beer, they have a lot more yeast in them, but you still need that raising agent.

The raising agent is baking powder.

If you are using self-raising flour instead of plain, it's good to add a little extra baking powder to the mixture.

WHY DON'T YOU KNEAD BEER BREAD?

When you're making a dough with yeast, you knead the dough to build structure and gluten in the dough to help with the texture and rise.

In a beer bread the small amount of yeast in the beer, reacts with the sugar you add.

This along with the raising agent and the bubbles from the beer help with the rise and the texture.

It really is a bit of alchemy. 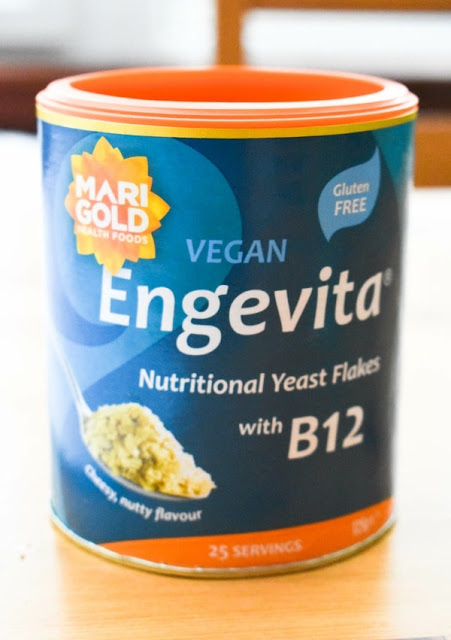 To add the cheesy flavour to this bread I use vegan parmesan and nutritional yeast.
If you don't have or can't get hold of vegan parmesan, you can use vegan cheddar instead, although it won't add as much flavour.
The nutritional yeast, also known as nooch also adds to the cheese flavour.
Another great reason for adding it is it is supplemented with Vitamin B12, which is important to include in your diet as it helps keep the body's nerves and blood cells healthy.
It's also good in preventing anemia, which can make you very tired and lacking in energy.
Read more about the importance of Vitamin B12 in the NHS article Vitamin B12 or Folate Deficiency. 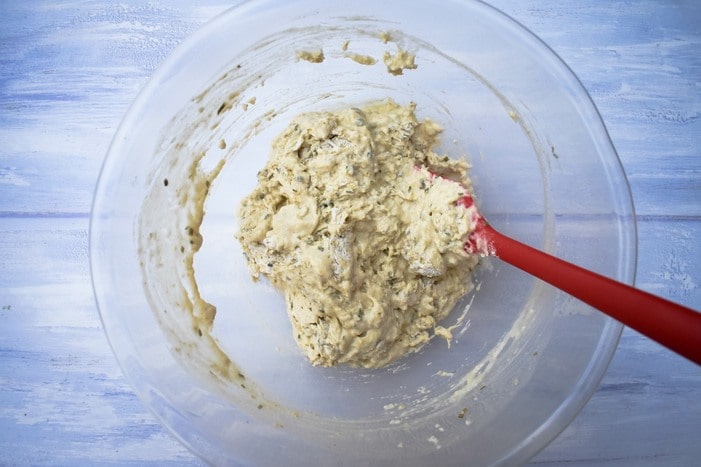 It's important you don't overmix your beer bread dough.

If you do, it will be heavy and dense.

Just pour the beer in and fold to mix until nearly all the flour is combined.

Don't worry if there are little patches of flour, it's more important not to over mix it. 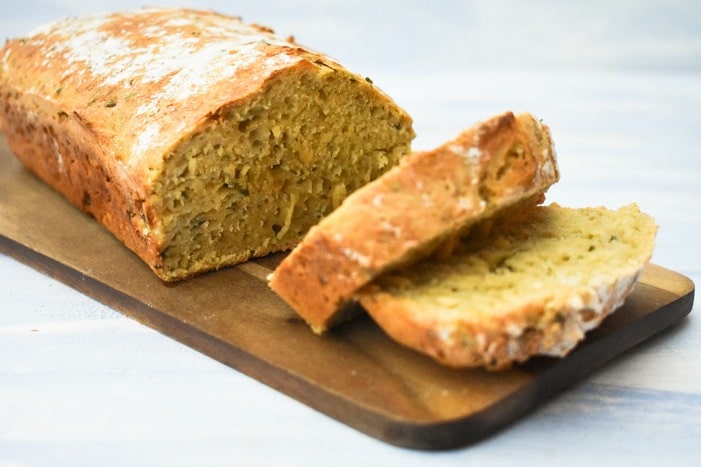 WHAT YOU NEED TO MAKE CHEESE & CHIVE BEER BREAD

You only need a few simple ingredients to make cheese & chive beer bread.

HOW TO SERVE BEER BREAD

Beer bread is rustic bread, so it's not the one I'd choose for sandwiches. Here are a few ideas for serving it. 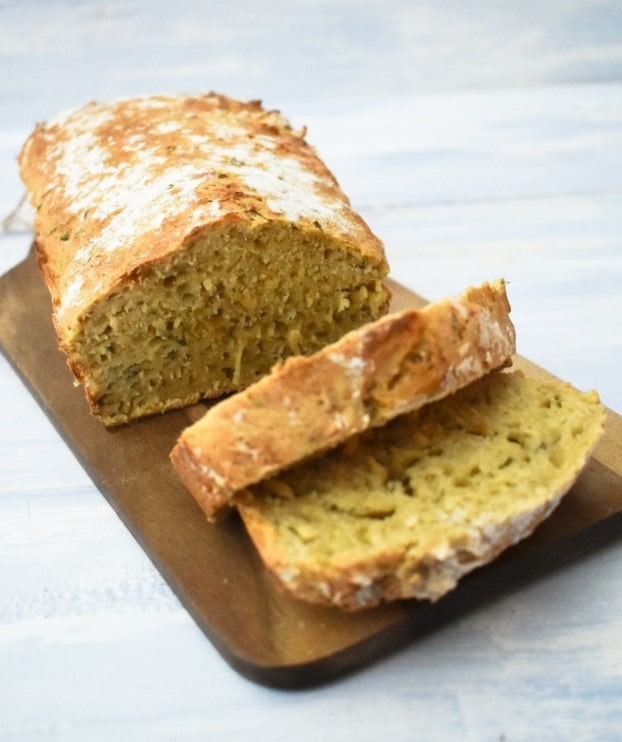 I've made many a beer bread and I love to experiment with flavours.
Here are a few beer bread recipes from my main blog Tinned Tomatoes. 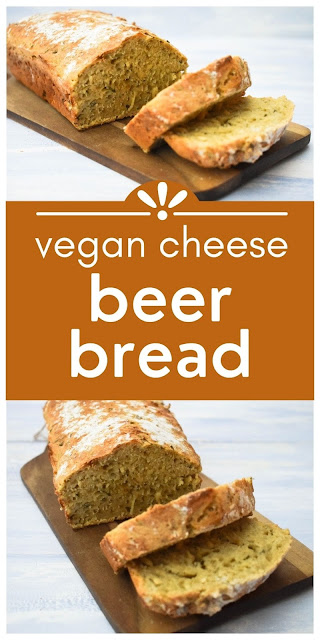 Scroll down for step-by-step photos followed by a full printable recipe. If you don't have a printer, hit the print button on the recipe card & save as a PDF.

Add the flour and baking powder to a mixing bowl.
Next, add the vegan parmesan and mix.

Now add the nutritional yeast and the dried chives.
These will add so much flavour.

Add sugar and salt to the mixture and mix well.

Pour the beer over the dry ingredients and fold in.
That's it, that's your bread dough ready, simple as that.

Pour the bread dough into the loaf tin and top with a sprinkling of flour.
The flour gives it a nice finish.

Bake until golden and when you knock on the base with your knuckles it sounds hollow.
Leave to cool, then serve and enjoy! 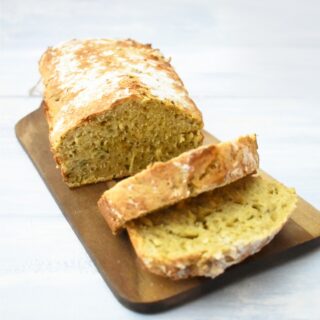